Since ancient times, Mt. Omuro has been considered a sacred mountain, containing a deity.
On the eastern side of the crater stands Sengen Shrine, a shinto shrine whose enshrined deity is believed to be Iwanaga-hime, daughter of Oyama-tsumi, god of mountains, sea and war.
As the sister of Konohanasakuya-hime, the enshrined deity of Mt. Fuji, Iwanaga-hime is prayed to for safe childbirth and success in marriage.

Five life-size Nyorai Buddha statues are set at the mouth of the former mountain trail to the west of the summit.
Over 300 years ago, the 9-year-old daughter of a wealthy landowner in the nearby prefecture of Kanagawa became pregnant. Her father prayed daily at Sengen Shrine for the child to be born safely. Despite the girl’s young age, the delivery went smoothly. As an act of gratitude to the deities who listened to his prayers, he had these statues installed.

According to legend, many years ago, a group of fishermen from nearby coastal areas placed these eight Jizo statues at the summit of Mt. Omuro, each facing the island of Oshima, for the safety and prevention of accidents and disasters at sea, and in hopes of ensuring good maritime transport.

Yamayaki: The burning of Mt. Omuro, heralding spring in Izu

This traditional event is said to date back around 700 years. It began as a way of clearing the dead brush from the mountain, in order to promote the growth of new thatch to be used for housing, as well as clearing pests. These days, the tradition has continued as more of a tourist event, to herald the coming spring season.
(The yamayaki event takes place on the 2nd Sunday in February, subject to weather conditions.)
The burning is split into two parts, the Ohachiyaki (crater burn) where the inside of the crater is burnt, and the Zenzanyaki (whole mountain burn) where the fire is lit from the foot of the mountain and burns upwards.
The fire moves quickly from the foot of the mountain, and the entire process takes only around 40 minutes.

Those who wish to take part in lighting the fire are welcome to.
Firelighters for visitors wishing to take part are available from the morning of the event at the Mt. Omuro Lift. Supplies are limited.

For more of our latest videos, please check out our YouTube channel.

A land created by volcanoes

Seen as the symbol of Ito City and Izu-Kogen, Mt. Omuro is a cinder cone volcano formed by a volcanic eruption around 4,000 years ago. Its pleasing and smooth sided pudding-cup shape is naturally formed, with a base diameter of 1,000m and a height of 300m.

The eruption of Mt. Omuro caused many changes to the landscape of Ito.
At the height of the eruption, huge floods of lava flowed out of the northeastern and southern foothills, filling valleys and basins and transforming what was once a rugged, mountainous landscape into a gently sloping plateau. This plateau is today known as Izu-Kogen.
The greatest concentration of lava moved towards the southeast, reclaiming approximately 4km of the surrounding ocean and forming the Jogasaki Coastline.

In the final waves of the eruption, the lava became much thicker, filling in the two foothills mentioned above, forming the bases of the smaller nearby mountains, Iwamuro and Mori.
The volcanic ash expelled from Mt. Omuro covered the sky over the entire Izu Peninsula. To this day, layers of speckled, pitch-black ash are still visible on cliffs and at construction sites in and around Ito City, a lasting reminder of this tremendous eruption. 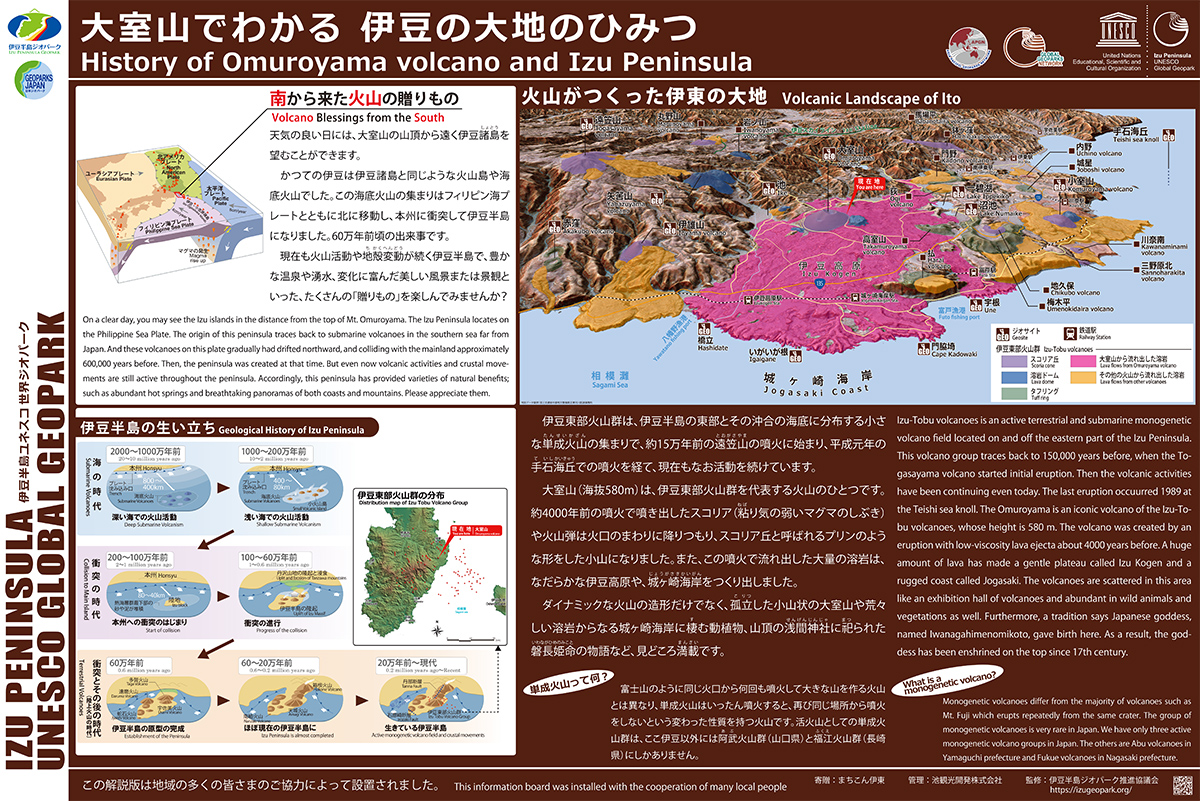